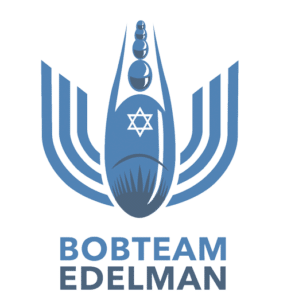 At first she refused but then she finally dared to get into this adventure after all: German Olympic champion Sandra Kiriasis, a friend of the aeoon family, is going to lead Israel’s bobsledders into their Olympic debut in Beijing. 2022. The pilot of the team, AJ Edelman, known as the „Hebrew Hammer“ and already a successful and well-known athlete, is willing to risk everything for his dream!

When Sandra visited our headquarters in September and told us about her project – to train the Israeli bobsled team and prepare them for the Olympics – it was absolutely clear for us that we had to support this adventure.

This team reflects a lot of aeoon’s core values – not only the passion for speed and the endless ambition to always improve. It is a team of different cultures, composed of successful athletes from various disciplines, but all with the same goal. The pilot, AJ Edelman, for example, is a former skeleton racer and one of the pushers, Amit Has, is the Israeli weightlifting champion.

Sandra is now back in action, where she feels most comfortable and where her passion and profession has been lying for many years. However, the conditions under which she wants to shape the young hotshots into competitive bobsledders are anything but conducive to performance.

Unlike what is customary in this country and what she had taken for granted in her glamorous career, the crew members have to pay for everything they do themselves. Whether buying a bobsled or runners, whether for transport, accommodation, treatment by doctors or physiotherapists – they always reach into their own pockets. The association is not able to cover expenses.

We are proud to be able to support such an extraordinary adventure!

“Sandra is our compass that will guide us to Beijing,” federation head David Greaves is convinced. So far, everything is also going brilliantly, raves Sandra, whose protégés could be her sons. Accordingly, they also behave respectfully toward their “mum,” as everyone affectionately calls her.

But – despite all the odds – the Israeli bobsled team is motivated and believe in their dream of gold! And we here at aeoon Technologies keep our fingers crossed – for Sandra and her unusual Olympic team! Good luck!

Here you can find more information about Bobteam Edelman